Showing posts from April, 2010
Show all

Whats going on in our lives these days. 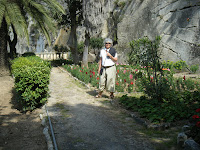 First sail with Moondancer's cruising chute. What fun that was. Putting it up Tony was almost hoisted up into the air. As soon as the chute filled we shot forward and had a romping sail.

My daughter Mary and her son Mission at a few days old, living in Victoria BC, Canada.

Wilfred Pirotta is a diver, who still works under boats replacing zincs, cleaning bottoms etc. even though he's in his 70's now. He carries his tank and equipment on this motor scooter which he bought a long time ago. The scooter still advertises the previous owners, Thomas Smith, Admiralty chart agents in Malta. He never bothered to take the name off.
I saw him later in the day after he had finished his dive and asked his name. I told him I would put him on the blog. He gave me his professional card and said that though he knew nothing about computers, perhaps his sister who lives in Canada would be able to see him.
We went to an exhibition of art by Wayne Attwood, a fellow sailor who has been trave…
4 comments
Read more

April 07, 2010
I've been looking forward to posting this particular blog for quite some time now. Yesterday Steve, the Royal Yachting Association examiner came back to our boat and spent the day with us.
While Tony went out to get us some pastizzi (savoury Maltese heart attack pastries) we got the theory part of the exam out of the way, which I pretty much aced - which was a great relief to me, because then it was all down to the sailing skills and piloting - no electronics allowed. Tony was my crew and Steve told Tony that he was not to help me in any way to make any decisions, just to crew.
It turned into a blustery day with the wind between 20 - 25kn. Given the wind direction we basically sailed downwind for a couple of hours with me navigating using running fixes to find a spot that Steve marked on the chart. I found it and he was satisfied with my effort and asked me to head for another place. There was alot of jibing - all controlled I'm pleased to say. It was a bit rolly as the w…
4 comments
Read more
More posts