Showing posts from November, 2008
Show all

Have a nice day! 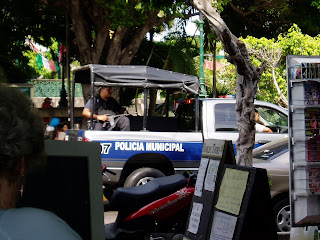 Nancy took this picture while we were in the internet place yesterday. I said watch out they don't take you away! That would have been quite the picture of her yelling and kicking. Put it on the Blog! 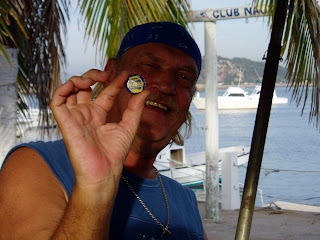 Hi Guy's Tony here. Having a hard time keeping the cervesa's cold! Met up with an Hombre who sailed down from L.A. a few years ago. He had a bad time in a storm west of Cedros island and got knocked down in 50 plus knots of wind. His boat a catalina 34 got beat up pretty bad as did he. He pulled through and made it to Mazatlan and has been here ever since. He stay's on hid boat in the harbour and hangs out with the locals. A great guy all around. What a wealth of info and some very humorous story's. plus we have one thing in common, we both love pacifico ballenas, which are very large beers! Cheers Jack!
I am sitting in an internet/laundry/coffee shop waiting for a lady to do our laundry. What a great place this is. Nancy is back at the boat making up some screens to go over the hatches, since the no see-umms will arrive when we go farther south.
Post a Comment
Read more 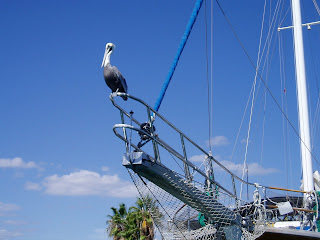 Cabo San Lucas – a great place to go if you’re into lots of energetic goings on. We anchored in the middle of the bay in front of a strip of resort hotels. So in one direction we looked at long sandy beaches with umbrellas, pyjama wearing Mexicans selling t-shirts to the people under the umbrellas. Tony was pleased to see them because he was wondering where all of the pyjama wearing Mexicans were.
Behind us was an incredible rock formation sculpted by the constant ocean surge. An incredible hole drilled right through one of the rocks through which resounded thousands of pounds of green water. I saw some young boys tempting the dreaded surge, then running back screaming as it threatened to smash them back into the rocks.
In between and all around us was the constant buzzing of jet skis, motor boats whizzing around at high speed, parasailors coming and going, water taxis playing chicken with the jet skis, and then on the second day add …
Post a Comment
Read more

MEXICO - Dox Exxis, Tequila and jumping off the boat 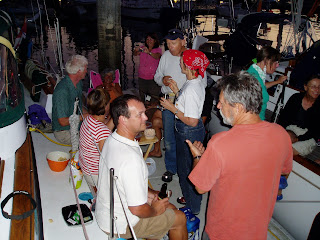 San Diego, will always be remembered as the place we walked the furthest to get everything we needed, and the place where Johnny left us after living with us in our little pod for 2 months. We also became part of the little community on the Police Dock - which is basically the Municipal Docks which only cost $5/day for 5 days and then $20/day for a further 5 days – then you have to move on.
I have noticed that it doesn’t take long to feel that we belong in these small communities in a very short time. A few boats we knew from the BCA Fleet group were there, including Len and Joan on Warana – Len very generously fixed our battery charger for us, which we would have had to ship somewhere to get a bridge rectifier installed – instead we found the little bugger(the rectifier, not Len) in Radio Shack and Len installed it.
We also found a perfect trade for the 45 lb. Bruce anchor that Tony found while diving in Emerald Bay, Catalina. Our neighb…
Post a Comment
Read more
More posts